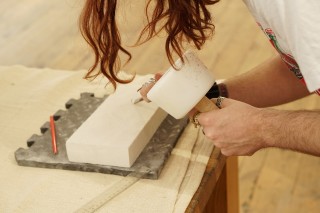 At this year’s London Craft Week, the Prince’s Foundation introduced woodcarving and stonemasonry to the next generation of makers

London Craft Week returned to the capital this May for its fourth annual edition. The festival is a not-for-profit, five-day event championing the very best in British and international creativity and craftsmanship from new makers to famous names. The Prince's Foundation was invited to introduce the joys and skills of heritage crafts to young people and curious beginners during the week. Stonemason Lily Marsh and woodcarver Sarah Goss curated two intimate workshops and imparted their expert knowhow as Building Craft Programme alumna.

Equipped with special wood carving tools, Goss’s students first practiced a range of basic techniques before they drew and carved their own initials into Limewood – a wood that is known to respond well to shaping and whittling. Marsh’s session saw an eager group of people aged 16-20 try their hand at designing mason marks, a custom that dates back to the 11th century. Armed with an introduction to expert hand tools and the qualities of limestone, the students now have the option to sharpen skills as a hobby or carry on to further study.

With around 6 million pre-1919 buildings in the UK, the sharing of traditional building skills is crucial when it comes to getting young people engaged in these fields of interest. “Many of the crafts people who have this skill set are thought to be approaching retirement age and often don’t have an apprentice that they are passing their skills on to,” says Lauren Banks, Programme Coordinator at The Prince’s Foundation. “We want to help train the next generation of building craftspeople so that they can help maintain the UK’s built heritage.”