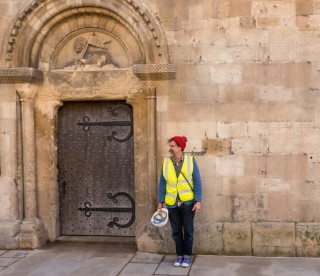 Despite its rich history and role as the last functioning parish church in central Gloucester, St Mary de Crypt’s future had looked uncertain, with shrinking congregations and a lack of investment bringing it to the brink of redundancy. Yet last year it received a huge boost with the launch of a major project to revitalise the striking Grade I-listed building, which dates back to the seventh century.

The bold multi-million pound Discover DeCrypt programme, made possible with a generous Heritage Lottery Fund investment, aims to restore the church and adjoining school – one of the oldest secular schools in England – with the project having several key objectives. “It will remain a place of worship, but will also forge a new place in the community by being proactive, working with young people at risk of offending, introducing a dementia café and becoming a performance venue,” says Nicola Dyer, senior project manager at The Prince’s Foundation. “Gloucester has ambitions to become a creative hub, and that’s where we come in. The city lacks smaller performance venues and this project will provide a place where creative people can come and network.”

The Three Choirs Festival, the Gloucester History Festival and a series of theatrical performances are all on the cards once the doors open next spring, bringing a new cast of characters to a church with plenty of history. “The Old Crypt Schoolroom had many famous old boys,” says Dyer, “including William Ernest Henley, who wrote the poem Invictus, and pioneering Methodist George Whitefield, who preached his first sermon there. It’s also the burial place of Jemmy Wood – the inspiration for the original Scrooge – so it’s got some lovely connections.”

Beyond its known history, archaeological digs have also revealed some fascinating new insights from the past. “We found a real mixture of pieces from Roman through to the 19th century,” says Kevin Potter of Avon Archaeology, which has headed up two digs at the St Mary de Crypt site. “There was a Roman coin – a great example of a fourth-century bronze centenionalis – and we also found some high-status Roman pottery, including decorated samian [ceramic bowls].” Potter also made a series of discoveries at the Old Crypt Schoolroom. “Among the most evocative finds were a small collection of toy cannons, made of pewter, which may actually have been able to fire.”

The varied nature of the archaeological finds shows the role St Mary de Crypt has played at the centre of civic life in Gloucester for centuries – something that the renovation project hopes will continue when the church and community spaces open next year.