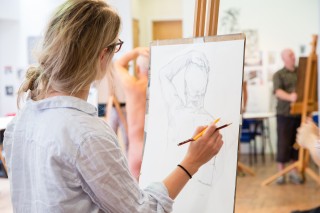 Lily Marsh undertook the Building Craft Programme to gain the Heritage Skills NVQ Level 3 qualification. She tells us what she enjoyed most and what she’s working on now.

“From the start of my training with the Building Craft College, my ambition was to do this intense programme and have the opportunity to travel and work across the UK, and learn from other skilled craftspeople. It offered me a chance to progress my skills and knowledge, and bolster the career change I'd made by gaining an NVQ. I was really excited to be offered the opportunity of being a Building Craft Apprentice.

“There were so many incredible highlights, from the three-week Summer School with life drawing and fun geometry classes, city drawing lessons, inspiring lectures and yurt-making, to the live build where I designed and carved a green man for the front façade of the building. Working as part of a team, where we were personally invested in the build and played a big part in its construction, was something I'd not experienced before and found really rewarding.

“Several tradespeople assumed I was a workmate's wife, dutifully helping out her husband rather than a stonemason working with her colleague”

“I also had four hands-on placements around the UK during the eight months, which were invaluable. My first was with Laing Traditional Masonry, working in the centre of Inverness to repair the Townhouse and up a very high scaffold from where I could see the highlands and snow-capped peaks. The second was with Cliveden Conservation, repairing the gardener’s house at Windsor Castle. My third placement was at Gloucester Cathedral, where I carved and mended a weathering buttress on the south side of the Lady Chapel. Lastly, I was at Woodchester Mansion, where we worked to repair and fix a buttress. Each placement was a unique and vital opportunity to be part of a team and experience life on a site. I enjoyed meeting lots of new people, being able to ask questions and learn about the different techniques used by skilled craftspeople.

“The programme massively widened my understanding of my role as a stonemason. I now feel part of a wider heritage industry and see myself as a heritage craftsperson, which I didn't before. Working alongside other enthusiastic and dedicated craft apprentices really encouraged me to understand the part I could play. Gaining an NVQ increased my confidence in my skills and in seeing myself as a heritage stonemason. It definitely helped my move into employment. Since graduating I've been working as a stonemason with a commercial, London-based stonemasonry company specialising in restoration, carving and repair.

“I'm currently working on a number of projects: one where I'm carving a quatrefoil in Bathstone to replace a damaged stone on a Victorian building in London; another where I've carved a finial in Portland limestone for a building in Golden Square, Soho. I've also been working on a big commercial site repairing and fixing large stones on a 1920s building.

“Sometimes I've experienced surprised reactions from other tradespeople; several assumed I was a workmate's wife, dutifully helping out her husband rather than a stonemason working with her colleague. I've found learning, making mistakes and developing my knowledge in this environment can be tough, but it helps me challenge my own and others' assumptions about what I can do.”