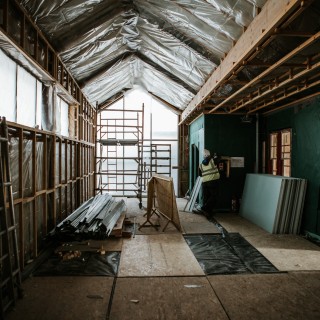 Just shy of three years since it was destroyed by fire, the station will shortly be restored to its former, former glory

When the Old Royal Station in Ballater – which had been turned into a restaurant and exhibition and visitor centre – was ravaged by a blaze in May 2015, it was as devastating a blow to Scottish heritage as it was to the small burgh’s 1,500-strong community.

“Queen Victoria bought Balmoral estate in the 1800s, then rebuilt Balmoral Castle, so the railway line was extended up to Ballater so the Royal Family could take the train to as close to it as possible,” says Robert Lovie, Deputy Executive Director for The Prince’s Foundation’s Outreach Programmes in Scotland. “When the station burned down, it was a huge loss to the community because there was a busy restaurant in there, right in the middle of beautiful Deeside, and suddenly it was just a bombed shell.”

Hence the redevelopment of the station, as part of a programme by The Prince’s Foundation, which will see The Prince of Wales – who opened the Rothesay Rooms restaurant in the town in 2016 – cut the tape when the Ballater Station Bistro and Tearoom, based on what was the station platform, begins welcoming customers later this year. “It’s a listed building,” says Lovie, “so it’s been completely rebuilt to reflect how it looked originally. The visitor centre within it will re-open this year, and the village library is also moving into the building.”

Meanwhile, a spot of public consultation has – literally – added a little more colour into the story of a landmark which hasn’t operated as a station since a huge restructuring of the British railways networks in the late 1960s. “After the station closed in 1966, it was redundant for a while, then in the 70s it was reinvented as an area office for Aberdeenshire council,” says Lovie. “They changed the colour to burgundy red, which remained for around 40 years.” The same hue would have been the default option for the rebuilt edifice, save for an unexpected intervention.

“Someone at a local heritage group produced a picture from the 1950s, and the building was painted in two pretty shades of green – British Rail’s standard colours up here at the time,” says Lovie. “So the council and the local Business Association took a straw poll, and decided to go with those colours. It’s lovely that it’s going to be returned to its original state. There’s been a very positive public response to it. We want to keep the whole design as close to the original station as possible.”