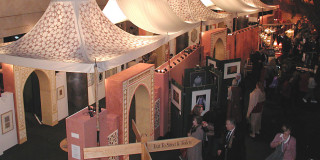 Collaboration with Shakespeare’s Globe Education began in 2004 when The Prince’s School was asked to design and decorate The Globe Souk, which became the focal point for the Globe’s celebrations of Islam Awareness Week that year.

The success of this project, in which The School led workshops and craft demonstrations, set up an exhibition and assisted with the development of a lecture series, has led to an ongoing relationship with the Globe’s Education Department. They continue to call on The School to assist with their work in bringing Shakespeare’s words to life, through workshops that provide historical and theatrical contexts, and various ongoing projects designed to reach out to the wider community. With this aim The School is asked to develop projects, or invited to help with projects that have been conceived by Shakespeare’s Globe.

A recent project, the ‘Tent for Peace’, revolved around the play Othello and took place in conjunction with the tour of Othello to seven cities around the United Kingdom. Based on the description of Desdemona’s handkerchief in the play, The School facilitated the design and making of handkerchiefs by school children across the United Kingdom. The children were taught basic principles of geometry and symmetry to create a wide range of coloured designs. This was achieved through training sessions for teachers, and study guides and banners developed for the project. The hand-drawn handkerchief designs were joined with others received from around the world to create the lining for a Tent for Peace that was constructed by one of the students of The Prince’s School and then unveiled at Shakespeare’s Globe.

Projects such as this take place throughout the year, providing a link between the plays of Shakespeare and the contemporary world through promoting the perennial principles at the heart of the traditional arts.