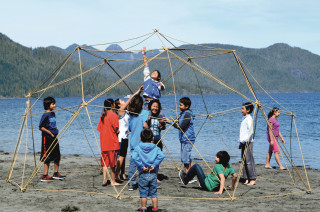 Our work in Canada is born out of the principal desire to honour the wisdom of the First Nations Communities. Our collaborative project with the Ahousaht community on the West Coast of Canada was initiated and made possible primarily through the shared vision of HRH The Prince of Wales and our Patron Kim Samuel Johnson, whose guidance in how to engage with the community appropriately was instrumental.

Hereditary Nuu-Cha-Nulth Chief, Shawn Atleo, guided the foundation of our partnership with the Ahousaht Education Authority. A programme of workshops was established for primary and secondary schools, young artists and the wider community. These workshops were designed as a response to the community’s growing realisation that its younger generations were losing connections with their Elders and with the spiritual principles and the consciousness of the order of nature that are so intrinsic to the Ahousaht way of life.

The team from the Prince’s School worked with local school-teachers and the Elders to find ways of passing on Ahousaht traditional wisdom and practical knowledge, so they could continue to be essential spiritual, cultural, social and economic resources that future generations could draw upon.

Our programme with Maaqtusiis elementary and high school students focused on three themes and crafts. The first was Geometry and Pattern in the Order of Nature. Investigating the language and symbolism of geometry in nature, students learned about universal design principles in relation to the traditional Nuu-Cha-Nulth world-view. This extended into practice with local cultural educators teaching traditional weaving – mats of cedar bark strips were gathered from the local rain forest and decorated with roundel designs inspired by the local, seasonal eco-system. In the second set of workshops, Geometry of Structure – Building Simple Shelters, students learned how to move from two-dimensional drawings to creating three-dimensional forms. Younger students built small bamboo structures on the beach, while older students designed and built a large dome structure, now installed in the village and used as a greenhouse. The whole community offered skills, time and local resources for the dome construction. The third set of workshops focused on Traditional Woodcar-ving. These sessions were followed by a series of open workshops for the whole community. The aim was to create a new section of the Wild Side Trail - an ancient Nuu-Chah-Nulth pathway, which is part of the Ahousaht traditional territories. The community learned about the meanings of North Western carving designs and used traditional carving techniques to decorate the trail boardwalks.

The programme enriched its participants with an holistic, shared experience of the Nuu-Chah-Nulth spiritual and cultural values, and our School’s ethos and methodologies. It reinforced the community’s identity and will hopefully help to form a stronger, fundamental sense of self-worth and pride in a culture that has deep historical roots.