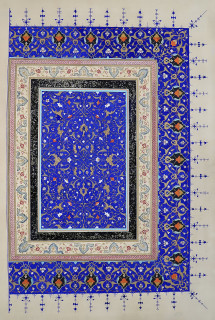 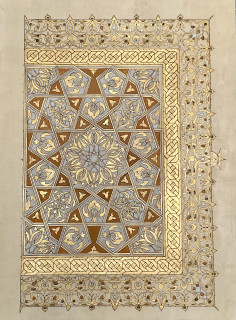 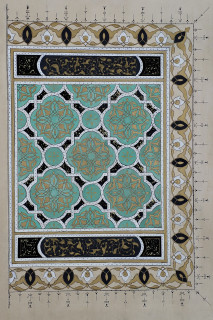 For my final year project work, I thought of working on something that I always had an eye on- Qur’an Frontispieces. So for my project, I researched about the different styles that were used in the earliest Qur’an frontispieces specifically in three different dynasties; namely, Mughal, Mamluk and Safavid.

The opening pages of the Qur’an, are known as the Frontispieces which along with other parts of the Qur’an such as the subsequent Surah (chapter), marginal ornaments and the Finispieces (the last two Suras)— are the parts in the Qur’an which are commonly illuminated.

The choice of the topic arises from my Faith or what I believe in and since Islam prohibits the representation of human or animal form in religious contexts, Islamic art finds its ultimate spiritual expression in beautiful calligraphy, abstract Patterns and illuminations- The richly illuminated frontispieces of the Qur’an emanate a golden and blue glow; this effect collectively lifts up the spirits of the congregation and inspires the believers to enter the doorway to Paradise- symbol this is said to be the purpose of the illumination of the Qur’an manuscripts.

The art of Qur’an illumination developed long after the art of calligraphy. Beautifying the Qur’an manuscript can be considered as an act of religious devotion and also has the function of facilitating the recitation of the Qur’an. The Qur’an itself alters certain opportunities for the illumination of the text and the expression of the artist. In Arabic and Persian culture, the art of illumination is known as Tezhip which means ‘gilding’-was taken very seriously in manuscript illumination as it increased the value and amount of energy expended according to the status of the authority or the person who had commissioned the artists to make the Qur’an. The arabesque or vegetal motifs is a proactive effort to diffuse images in the mind, just as the recitation of the Qur’an dissolves the preoccupation of the mind on an object of desire. The repetition of patterns in architectural designs hints at the infiniteness of God. This is also why arabesque is sometimes referred to as ‘infinity-art’.

In conclusion, these illuminated works strike a perfect balance between Nature’s beauty and the artist’s work. The material mainly used in the illumination is gold. Vegetal and floral motifs inspire the designs in Islamic Art, but their spirit resides on a higher plane of Divine qualities. Nature is a reflection of these qualities and is regarded as a proof of the Creator’s power. 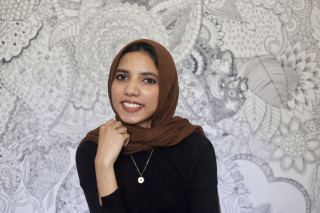 Shadiya hails from the God’s Own Country – Kerala, India. A graduate in Visual Media and Communication, her love of art evolved from digital art and illustrations to Islamic art.

Her passionate enthusiasm in the form of continuity and an obsessive interest in the healing effect of geometric patterns made her follow the path towards the study of traditional art and took her to Prince’s Foundation School of Traditional Arts, London.

She currently focuses on the genre of Islamic Manuscript Illumination. She wishes to take her studies and interest in Islamic art forward in its most authentic form.