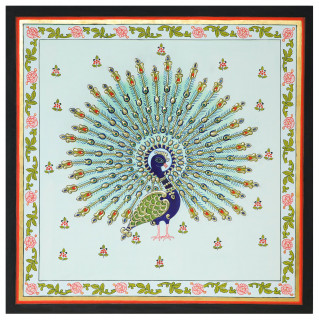 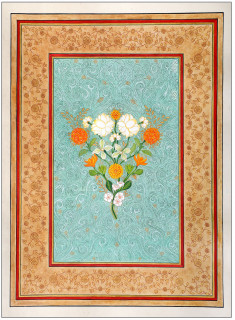 Having been brought up in an orthodox South Indian family and trained in South Indian classical music (Karnatic music) I had the inclination from my childhood towards learning several sacred verses. Studying at The Prince's Foundation School of Traditional Arts has helped nurture the artist within me and I am very delighted to translate a few sacred verses into a visual medium.

I have experienced myself how subtle variations in the frequencies produce thousands of musical scales and modes may evoke different moods. I have also been inspired by several treatises on music which have elaborated on how musical notes can be associated with colours and animal sounds.

I have used traditional methods and materials in painting such as tree gum, wasli paper, gesso, semi-precious stones, pearls, gold (transfer leaf, shell gold, gold foil) and stone colours all bought from authentic sources specified by the tutors in India and the UK. Here I would like to describe in a few words four major pieces I made with the aforesaid ideas in mind.

In spiritual science, Sri Yantra is a representation of a mantra- sacred syllables in visual form. It is a geometric representation of the Shiva - Shakthi principle in a unique formation of forty-three triangles resulting from a combination of four upward- facing Shiva triangles and five downward-facing Shakthi triangles. There are nine enclosures in all, each with a specific name, colour and retinue of deities at specific places. The Shakti resides at Bindu, the starting point of creation of the Yantra, marking the centre of divine consciousness.

This is a traditional practice of offering flowers during religious worship to the gods and goddesses, more specifically with the ones mentioned as their favourite in sacred texts. I was also influenced by Mughal miniature style in designing the border.

In a string of a hundred poems on Shiva by Adi Shankaracharya, Shiva is described as dancing like a peacock at dusk, dedicated to the beautiful Parvathi/ Shakthi, to the music of a drum played by Vishnu). Since The Brihadeeswara temple, Shiva’s shrine is at Tanjore, Tamil Nadu, in Southern India, I wished to depict this painting using the Tanjore art form.

Nataraja, a form of Shiva, is the symbol of victory for the Chola rulers between 9th and 13th century (present day Tamil Nadu). Both the Shiva shrines at Chidambaram and Tanjore, built by Chola rulers, have sculptures of the dance poses of Bharatanatyam (one of the classical dance forms of south India). The iconic pose of Nataraja is twenty-fourth among 108 dance poses. 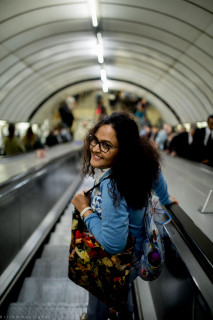 Lalita hails from the city of Hyderabad, India. She is a professional vocalist, trained in South Indian Classical Music for over 3 decades. Before her Masters in Traditional Arts at the Princes Foundation, Lalita completed an M.A. in music. She is well known for organizing and promoting South Indian Classical music across India.

She aims to explore spiritual-philosophical themes from Indian traditions through her art, while also working towards promoting often under-represented and dying art forms of India