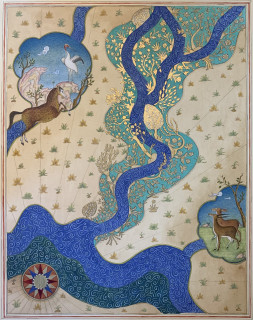 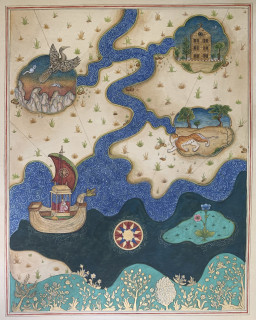 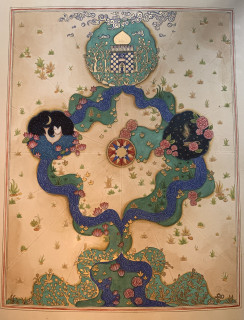 In the Footsteps of the Beloved

My 2nd-year project was inspired by my love of medieval Islamic maps. I have always felt drawn to the visuals of these extraordinary manuscripts and the seemingly naive shapes and forms they contained, dotted with Arabic letters and numbers. Their appearance seemed curious and almost magical and had the effect of lulling me into a dream-like state, wondering what travel would have been like hundreds of years ago when so little was known about the globe. I imagined that embarking upon a journey was exciting and unpredictable with an underlying sense of danger. In a strange way, it felt like it was not much different from the reality of my current environment, crippled by Covid 19. These maps seemed even more relevant and captivating to me now and upon further study and reflection, I realised that there was so much more to them than just being a source of navigation. I started thinking about journeys and travelling, what it means to seek and how that changes us.

To delve deeper into this concept, I started studying the history of the region where I come from: the ancient Indus Valley Civilization (present-day Pakistan). It is a place with a distinct character, shaped by countless journeys and foreigners that it attracted over thousands of years. These journeys revealed the rich lands surrounding the Indus River, not only in their physicality but also on a more intangible level that is both intellectual and spiritual. Outsiders from surrounding territories risked life and limb to travel here. Mostly Central Asian, these travellers arrived in the form of nomads, warriors, mystics and ascetics. They mixed and melded with the indigenous population and gave birth to a specific identity belonging to the region located around the Indus River.

To illustrate this, I have painted three principal works showing three types of journeys: the physical, the spiritual and the personal. The physical journey depicts a lapis river surrounded by lush foliage. It depicts a rich, fertile place towards which outsiders are attracted. From the rugged north, a horse and a Siberian crane eye the land, (both symbols of Central Asian encounters). Meanwhile, a pair of Indian deer from the sedate southern plains longingly gaze at the prized land.

The second painting or spiritual journey shows the river as a symbol of God’s Divinity, leading up to a mystical, magical world containing a tomb. The much-loved Sufi saint, Lal Qalandar (buried in Sehwan Sharif, Sind), was the inspiration behind this work. Revered equally by Muslims, Hindus and Sikhs, he is the epitome of the complex synergy that exists between religious beliefs in the Indian Subcontinent. The fish (‘Palla”) and lotuses on the left are symbols commonly associated with the saint. Local legends claim that he not only controls the ebb and flow of the river but also the life that resides within it. The roses and oil lamp, synonymous with beauty and light, are eternally present features at Sufi shrines.

The third and final work maps my personal journey. Again, water plays the central part as a source of life around which lie certain poignant landmarks or events that shaped my own life’s journey. The bird flying away signifies the loss of my father, while my mother is shown in the form of a tiger, a symbol of strength and persistence. I have also shown my school in Karachi, a stable and steady presence for eleven years.

These paintings are accompanied by 12 smaller supporting works that highlight different aspects of my narrative. All together, these paintings aim to tell the story of a land that was desired by many and became home to many, sometimes through bloodshed and sometimes through spiritual teachings. It is the coming together of these influences or these forgotten journeys, that define this land’s mesmerizing, complicated and magical character. 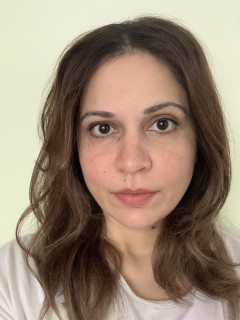 My work explores the concept of journeys using visual inspiration from medieval Islamic maps. Created in a graphic, map-like format, my paintings use vivid and highly detailed imagery contrasted with organic and fluid forms to illustrate the forgotten journeys that shape our life experiences, both as a society at large, as well as on a personal level. I use Indo-Persian miniature techniques to paint my maps. This technique allows me to create sharp details using subtle shading methods which I overlap with larger shapes to make scenes that are part map, part landscape and heavily steeped in symbolism. Staying true to traditional practice, my watercolours are hand-made using pigments derived from rocks, plants, earth and gold leaf.