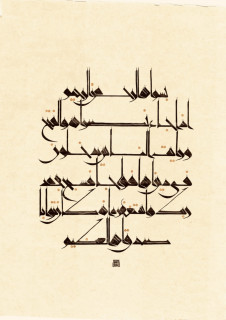 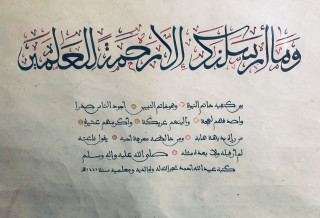 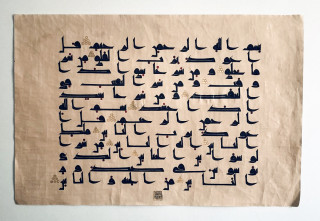 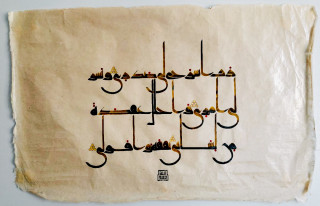 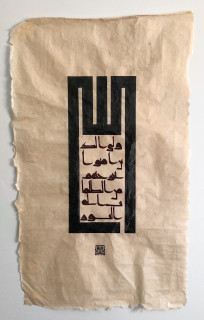 “Calligraphy is a spiritual geometry produced by a material instrument.” This concise aesthetic statement, found in early Islamic sources, has guided the development of Arabic calligraphy.

My personal journey with calligraphy began whilst I was studying in Cairo, Egypt. I moved to Cairo in 2009 so I could learn the Arabic Language with its rich history, meaning and diversity. During that period, I discovered the practice of calligraphy after a penmanship course and completely fell in love with its profound beauty. I then decided to embark upon trying to master the many scripts from the Ottoman, Kufic and Maghribi schools so that I can receive my Ijazaat (authoritative calligraphic diploma licences).

With Arabic calligraphy, it is possible to write the same word or phrase in many ways, opening the door to an endless search for new styles and innovative approaches. The letters vary to an astounding degree, depending on which of the various scripts / school is used and which calligrapher. Each calligrapher has a distinctive style, which can be as identifiable as a fingerprint, giving the piece of art its unique form. To me this was fascinating and is the reason why I embarked on the journey of becoming a calligrapher and to keep the tradition alive by practising to the very best of my ability.

After studying with Master calligraphers Aws Alansary (student of Syed Ibrahim and Muhammad Abdul Qadir), Abduh Aljammal (student of Mahmoud Ibrahim Salamah) and Hassanein Mokhtar (student of Belaid Hamidi, Khodeir Alborsaeidy, Salah Abdulkhaliq and Issam Abdulfattah) during my time in Egypt in the Ottoman, Kufic and Maghribi schools, I received my Ijazaat in the majority of the scripts from these schools.

After moving back to London in 2017, I was very fortunate to discover the PFSTA. During my time studying the MA at The School, I was introduced to various skills and crafts such as Geometry, Gilding, Western Calligraphy, Ceramics, Parquetry etc. that has truly deepened my understanding of the world of traditional arts that I am now able to use with Arabic calligraphy. This is part of my never-ending journey of art and calligraphy, to explore, research and continue to learn and grow.

For my second part of the MA, I’ve been working on the following pieces during the lockdown after a lot of research and gaining inspiration during my time at the PFSTA and my study trip to Cairo and Istanbul after the first year exams where I was able to delve into the various scripts I learnt while also experimenting and researching other variants of the Kufic and Maghribi schools. Unfortunately, I wasn’t able to complete ideas of working with Ceramics with calligraphy because of the lockdown but it’s still been a blessing and amazing experience.

The first piece (The Protectors) is written in Manuscript Kufic from the 3rd century of the Islamic calendar. The text is written in Black Japanese Ink with red ink for the diacritical marks and dots in gold (23ct gold) for the ending of some verses on ahar (natural burnished hemp) paper. The text comprises the two suras (chapters): Al-Falaq (Daybreak, Chapter 113) and Al-Nas (Mankind, Chapter 114) of the Quran.

The second piece (Prayer of Moses) is written in Manuscript Kufic of a different school to the first piece. The text is written in Walnut Ink with the diacritical marks in red ink and gold

(23ct) for the end of verses on banana ahar paper. The text comprises verses of the Quran (Chapter 20, verses 25-28), a prayer by the Prophet Moses to his Lord.

The third piece (Divine Support) is written in Eastern Kufic from the early centuries of Islam. The text comprises Sura 110 of the Quran. It is written in black Iranian ink, and also gold dots for the ending of verses on ahar banana paper. It is the third shortest chapter of the Quran. This was the last chapter to be revealed to the Prophet Muhammad only a few months before his death.

The fourth piece (Maghribi Hilya) is a Hilya piece in the Maghribi scripts; Maghribi-Mabsout and Thuluth Maghribi. The Hilya was originally written by Ottoman scribes dealing with physical descriptions of Prophet Muhammad from a narration by Ali, his close companion and fourth caliph of Islam. The text is written in black Iranian ink on green ahar paper.

The fifth piece (Darkness to Light) is written in manuscript kufic and squared kufic. The text comprises sura 2, al-baqara (the cow), verse 257. It is written in black Japanese ink and red ink on banana ahar paper.

Born and raised in London, Ubaydullah is a calligrapher who has his authoritative calligraphy licenses (Ijazaat) in the Ottoman, Kufic and Maghribi scripts. At the young age of 19, he travelled to Cairo in 2009 to learn the Arabic Language and classical calligraphy from some of the great masters including Aws Alansary, Abdoh Algammal and Hassanein Mokhtar in a traditional system passed down from master to apprentice for centuries. Studying within the rigorous Master-Apprentice system has equipped him with a comprehensive understanding of the art as well as a skilful use of the pen.