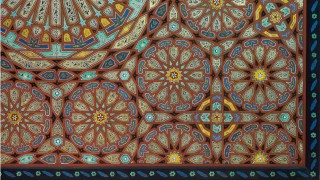 The art of Zouaq painting is a technique native to Morocco which can be found painted onto ceilings, doors, furniture, and wooden objects – intrinsic in the decoration of sacred spaces and private homes.

The Prince’s Foundation School of Traditional Arts teaches this geometrical painting technique as a short course taught by tutor Natasha Mann. Students learn about Zouaq’s history and the subtle differences in styles before making a stencil and transferring the design to a wooden panel, utilising egg tempera.

We speak to artist Natasha Mann, who was awarded the Barakat Prize for Islamic Art in 2014, about how she became captivated by Zouaq.

I had always been attracted to the style and aesthetic of Islamic architecture from a very young age, which goes back to family holidays to North Africa. I was particularly drawn to the colours and designs of Moroccan woodwork which prompted me to eventually move to Morocco.

Where did you study?

I initially did a degree in Arabic and French at Cambridge University and moved to Fes in Morocco for my year abroad. During this time I undertook a ten-month apprenticeship in Zouaq painting with a Zouaq master. He was incredibly generous with his time and taught me all the traditional processes involved in creating a Zouaq painting, as well as how to create the biomorphic patterns. During the apprenticeship, we worked purely with acrylic/household paints and I became curious about the traditional paints made from natural pigments which had always been used on all the woodwork.

This desire to learn about traditional painting techniques and geometry prompted me to study a Masters at the Prince's School of Traditional Arts. The two years spent at PSTA taught me so much and enabled me to research Zouaq painting and to explore my own response to Zouaq. I have also just completed an MA at the Courtauld Institute of Art specialising in Medieval Spain and Morocco, which has helped to give me a more formal background in art history.

How did this prepare you for projects after you finished studying?

The outstanding tuition at PSTA certainly helped set a high bar for teaching. The importance attached to keeping thorough records of our work throughout the MA enables students to not only reflect on what they are doing but to have a strong technical ability which I have found invaluable for all my projects. My studies at the Courtauld have also given me a greater understanding of Moroccan art and architecture which has helped me a lot when teaching.

What has been your most challenging project?

Some of the most challenging projects have been simply working out complex geometric patterns for commissions which invariably take far longer than I had originally anticipated!

What is especially exciting about teaching the Traditional Moroccan Painting course?

I really enjoy teaching this Zouaq course as I am always surprised by how everyone starts off with very similar designs but each painting ends up looking completely different! I also feel I learn a lot from the colour choices students make and how colour combinations that I would never have originally considered end up working really well.