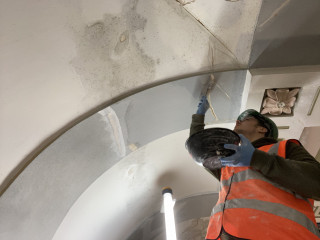 To further hone their skills and broaden their experience through working on significant real-world projects, students of The Prince’s Foundation’s renowned Building Craft Programme take their talents to sites the breadth of the country to assist in important restoration projects on historical buildings.

Occasionally, a student’s repertoire of traditional building skills will lead them to projects in which The Prince’s Foundation, in its work to restore heritage buildings across the UK, is already involved. A recent example of such serendipity is in ornamental plasterer Greg Smith’s recent work at Dumfries House in Ayrshire being followed by important work in the restoration of Drapers’ Hall in Coventry.

Greg, from Sheffield, enrolled on the 2020-21 Building Craft Programme, which during the global pandemic remains the only in-person programme continuing under The Prince’s Foundation as it allows sufficient distancing between participants. A ‘live build’ project typically forms part of the Building Craft Programme and, in recent months, Greg and his classmates have worked hard to restore Pennylands Cottage on Dumfries House estate and create an adjacent kennel facility. The new complex will provide a beautiful home for the estate’s shepherdess Charlotte Darwent.

Having excelled in that ‘live build’ role, Greg, a former pupil of Bradfield School who went on to study his craft at Barnsley College, embarked on his first of two placements with Cliveden Conservation. This led him to Drapers’ Hall, an 1830s building in Coventry being revitalised by The Prince’s Foundation ahead of a scheduled reopening later this year.

The Coventry landmark is now a grade II* listed building which lies close to the city’s university and cathedral, provided social rooms for local drapers until the 1960s, whereupon the building was sold to the local authority. Having fallen into disuse for the past 30 years, The Prince’s Foundation and Historic Coventry Trust initiated a refurbishment and repurposing of the hall into a music education and performance venue and community space.

The current timetable sees the hall completed by Spring 2021, in time to host a series of musical performances as part of Coventry’s tenure as City of Culture from May 2021 to April 2022. In the long term, the main tenant will be Coventry Music, which serves 15,000 school pupils in the local area and is moving from an industrial premises in the north of the city to Drapers’ Hall. The organisation will benefit from refurbished practice rooms and storerooms as well as performance spaces, with the showpiece ballroom at the heart.

Greg spent four weeks at the West Midlands site on placement with Cliveden Conservation, focusing on lime-plastering and remedial work to ornament ceilings.

“Some of the ornate plasterwork was cracked and needed replacing, so a profile would be taken on site, a mould then made up at Cliveden’s workshops and sent to Drapers’ Hall, and we would use it to make repairs,” explains Greg. “Other than that, I helped apply backing coats on the walls to level them, repaired patches in the large hallways, and, in the grand main hall, repaired damage to the cornices.

“Inside, the building was quite ornate. It’s nice to see something restored to what it used to be like rather than being left to rot. I really enjoyed the work, and it was nice to learn something new in lime-plastering rather than just focusing on the ornamental stuff, which is quite a fiddle, filling in joints and mitres. Lime-plastering, with a hawk and trowel, is more labour-intensive but you feel a great sense of productivity at the end of the day when you stand back and reflect on the scale of what you’ve done.”

Cliveden have been on site at Drapers’ Hall since October 2020 as work continues towards completion in Spring, with new tenants Coventry Music preparing to move in during Summer.

“The Prince’s Foundation’s work in conserving historic buildings is important,” said Greg. “Not all companies focus on heritage work; often, it’s all geared towards doing new-build work. If you’re not teaching people how it used to happen, no-one is going to be able to repair historic buildings in the future.”

Greg is typically employed as a sub-contractor for a handful of construction and conservation contractors in Sheffield. His skills in fibrous plastering, making cornice moulds and casts, and making good ornamental features have been applied to dozens of projects, including the stunning Empress Ballroom in Blackpool’s Winter Gardens.

“I heard about the Building Craft Programme at Dumfries House from a friend who had done the course and enjoyed it,” he said. “I hadn’t worked with stonemasons before, and it was really handy to see how other trades work, what they need, and how they do their job. If there’s a chance to incorporate stonemasonry or brickwork into my work in future, I’d be well prepared now. Working on Pennylands Cottage and seeing the kennels going up as fast as it did was amazing.”

Greg is now [February 2021] undertaking his second work placement with Essex-based specialists Locker and Riley on the restoration of the iconic Plaisterers’ Hall in the Barbican area of London. He is scheduled to graduate from The Prince’s Foundation’s Building Craft Programme at a ceremony at Dumfries House in September.

Later this year, Drapers’ Hall is set to reopen to the public with a series of music performances and calendar of entertainment.

The Prince of Wales’s Charitable Fund has helped to fund numerous additional projects initiated by The Prince’s Foundation, including training in hospitality, textiles and horticulture, education in food and farming, traditional building constructions and restorations across the UK, and planning and development work with various Commonwealth countries.