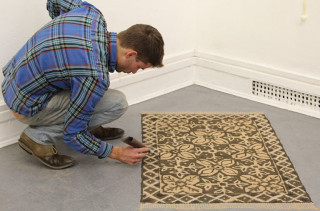 Jethro graduated in 2014, winning the Ciclitira Prize for his degree show exhibition. Much of his work was sold before the degree show opened and he continues to enjoy commercial success.

Before studying at the School, Jethro travelled to Jaipur, Rajasthan and thanks to an INTACH grant was an apprentice to the Master Indian miniaturist, Ajay Sharma. His first few days were spent catching a squirrel to make his paintbrush from its tail hair. (No squirrel was harmed!) He went on to learn every aspect of miniature painting from preparing paper, to smashing up semi-precious stones and grinding minerals to make pigments.

Jethro brought the timeless principles, techniques and motifs he learned in India to his studies at the School and used them as the basis for his new and exciting work.

Seeing himself more as a cultivator than a creator of paintings, Jethro aims to tap into nature’s rhythms and patterns, letting them come through and be shown in his paint.