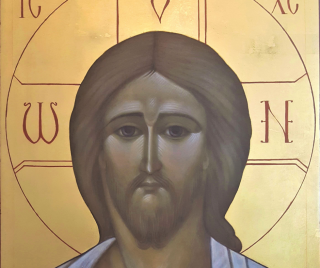 The Face of Christ at the Second Coming 4 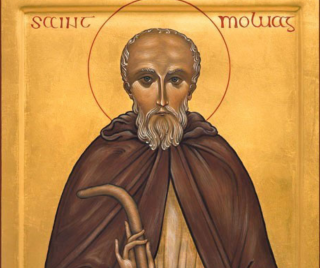 Icon of St Moluag of Lismore 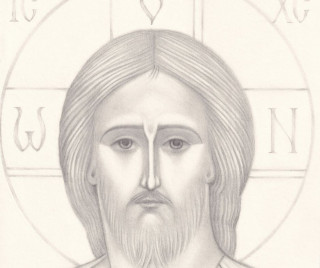 The Face of Christ at the Last Supper 3

Christabel is an iconographer, teacher and writer. Specialising in Orthodox Christian iconography, she creates traditional panel icons in egg tempera, pigments and gold leaf, and miniature-painted icons using techniques of manuscript illumination on vellum in hand made watercolour, gold and gemstones. All of the work is created within the tradition of the Orthodox Church and the designs, methods and materials are inspired by sacred iconographic exemplars, the lives of the saints and the holy tradition.

An artist since early childhood, Christabel began to research regional variation in sacred art and architecture in 1991, and after a BA degree at the School of Oriental and African Studies (SOAS) and extensive independent research, since 2002 has focused on the study of Orthodox Christian iconography, theology, and the development of Christian art, especially that of Britain and Ireland from the late antique to early medieval periods. From 2008 to 2010 she undertook a Master’s degree at The Prince’s Foundation School of Traditional Arts where she now teaches for the open programme.

Entitled ‘Design within Holy Tradition: Towards a Theological Approach in Iconographic Practice, from Saint Moluag of Lismore to Saint Sophrony the Athonite’, the research explored potentialities, parameters and methodologies for designing new icons of saints without existing iconographic prototypes. This is a significant matter for iconographers as the icon does not present arbitrary appearances but is a true representation and spiritual portrait of specific saints. Furthermore, iconography is a sacred and liturgical art which communicates the theology of the Church.

In this country there are many early saints and although accounts of their lives, accomplishments and virtues are plentiful, physical descriptions and early artistic representations are rare. There are also cases of recently canonised saints from throughout the Orthodox world whose iconography is currently in a developmental stage. The research focus was to find a systematic method towards design within sacred Orthodox iconography, intertwined with the theological and spiritual tradition.

Beginning by examining early saints such as the 7th century St Theodore of Tarsus, Archbishop of Canterbury, and the 6th century St Moluag of Lismore in Scotland, the research considered details such as physiognomy, hagiographies, vestments, tonsures, regional variation in design, architecture and other details. Then, approaches in traditional iconographic practice were assessed and the face was identified as the central focus of the research. The theological and scriptural underpinnings of the iconographic tradition, iconographer and artist saints, and the role and spiritual state of the iconographer, asceticism and grace were then studied.

In seeking an exemplar for an approach, the work then centred on an exceptional contemporary theologian and iconographer, Elder Sophrony (Sakharov, d.1993), founder of the Stavropegic Monastery of St John the Baptist in Essex. Towards the end of the research project he was canonised as Saint Sophrony the Athonite by the Holy and Great Synod of the Ecumenical Patriarchate. The many projects based on his work involved carefully studying every detail of his approach as a form of apprenticeship, ultimately focussing of the iconographic rendering of the face of Christ. In particular, Christabel studied the connections between the rendering of the image of the face and the theology of personhood, the hypostatic principle, and the ‘inverted pyramid of being’. Also considered were expression in iconographic language, how the painterly language of form, line, tonality, luminosity, hue and texture communicate theology, personality and atmosphere.

Christabel is deeply grateful to The Prince’s Foundation, School of Traditional Arts, and to the A. G. Leventis Foundation and Queen Elizabeth Scholarship Trust for their generous support, encouragement and dedication. 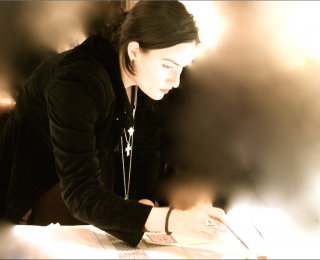 Christabel Helena Anderson is an iconographer who specialises in the creation of icons in egg tempera and gold leaf on wood panels, illuminated miniature paintings in hand made watercolour on vellum, and enamelled metalwork created within the holy tradition of the Orthodox Church. The designs, methods and materials are inspired by ancient sacred iconographic exemplars and the early iconography of Britain and Ireland.

Her recently completed doctoral research project on the subject of necessary icon design is entitled ‘Icon design within Holy Tradition: Towards a Theological Approach in Iconographic Practice from St Moluag of Lismore to St Sophrony the Athonite.’

Christabel teaches at The Prince's Foundation School of Traditional Arts, she is a Queen Elizabeth scholar (QEST), an A. G. Leventis Foundation scholar, GIA Accredited Jewellery Professional, INTBAU Young Practitioner, and she also writes for the Orthodox Arts Journal.