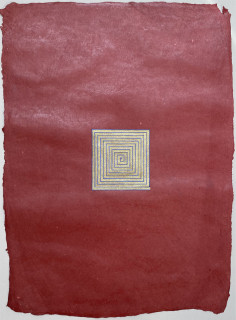 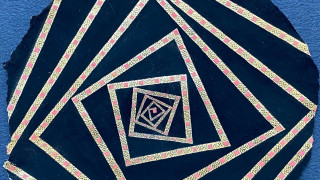 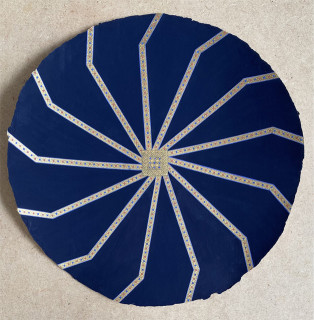 Borders of the Infinite II

The question of orientation is central to any kind of journey that one undertakes. Art making, particularly within the traditional arts is an act of orientation and self-grounding both on a physical as well as on a metaphysical plane. In the physical sense, the delineating of space is the first step in this journey and it is also the principal act in creating an image on any given surface. As for the metaphysical aspect, the idea that is fundamental and certainly not limited to the traditional arts alone, is the experience of existence as a reflection of a higher reality, the Absolute. Seeing the world as a reflection of this ultimate ideal informs traditional art and reaffirms this lineage through practice. In this sense all of life is a journey towards a return to the original archetype and a central objective of traditional art is to reawaken this lost connection and assist in making this journey from the exterior world to the interior. It is not a coincidence therefore, that the traditional arts are still deeply rooted and actively engaged in the entire process of art making, from the grinding of the pigments to the preparation of the ground. Without the inner journey, the work is only ever external and illusion based.

For this series of paintings, I have used the language of Islamic art as found in Persian miniature and manuscript illumination. These works are not based on a single narrative but are stand-alone images albeit connected in subject matter and visual vocabulary. One of the main strands of the work looks at the symbiotic relationship of the Islamic term “Al-Arsh” denoting the Divine Throne and the term “Al-Farsh”, denoting the floor. This encapsulates the relationship between the Divine and the earthly as well as that of the vertical and the horizontal plane both literally and metaphorically. In relation to the visual inspiration for these pieces, I have been researching Islamic textiles and robes of honour in particular, to explore this idea further. The form or silhouette of the robe (in a sense denoting mankind) represents quite succinctly this cross sectioning of the two terms, “arsh” and “farsh”, or of the two extremes of the axis mundi. It also coalesces in the idea of “Al-Insan-al-Kamil" translating as “The Perfect Man” and can be understood as all of mankind being the Ultimate Symbol of the Divine Archetype.

My visual research has also expanded to studying examples of geometric “Gireh”(Knot) borders found in Quranic Illumination. The idea of the knot in itself is also of interest, not only in its symbolism, but also in its visual potential. Formally, it offers a myriad of options within the confines of the grid which create an invigorating and dynamic interplay of movement and stasis. There is also a resonance between the idea of the knot and the clot which as a term appears in the first set of divine revelations of the Prophet Muhammad. (“Read in the name of your Lord, Who created, Created man from a clot”). This encapsulates the idea of the origin of man and coalesces with the ineffable mysteries of the Divine. It is also the inspiration for the spiral form and its unknowable and ever moving centre, that cannot be fixed and yet is an inexhaustible source of life. 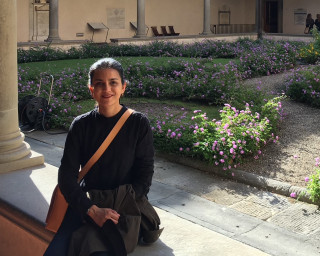 Born in Lahore, Pakistan, Sana currently resides and works in her studio in London. Having completed her MFA in Painting from the Rhode Island School of Design, she gravitated towards the traditional art form of Persian Miniature particularly the use of pattern and architecture within this form. Another aspect that she engages with in her work is the form of the miniature both in painting as well as Illumination and the interiority of space that it deals with on the physical as well as the metaphysical plane.