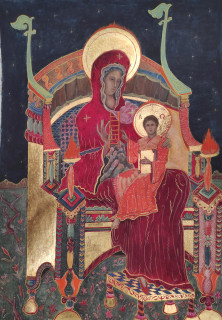 Theotokos, the Rock Not Hewn by Hand 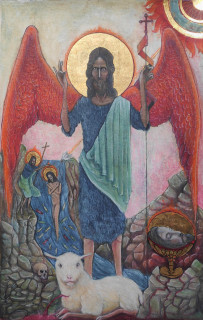 The Angel of the Desert 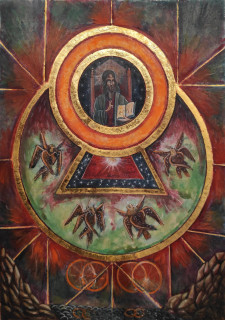 In the light of the Abrahamic lenses, humankind has gone astray from its closeness to God. This degenerated shape of human is called fallen man and, its antonym is, as pointed out by Martin Lings (2005)[^1], primordial man. Primordial man, as expressed by Lings, is endowed with profound and spiritual intuitive knowledge and therefore is in harmony with the source of all, the One Truth. Part of the argument of the Fall is that humankind has forgotten the knowledge given by God and thus the journey of enlightenment is not learning new things but rather remembering what has been forgotten. Hence, recovery of the state of primordial man is verily the ultimate achievement of re-connection, the way back to the Divine Source, the goal of religion. The artistic language, at least the one fomented by spiritual truth, delivers a glimpse of the original relationship between Heaven and earth. It demonstrates how eternal archetypes dwell in the earthly realm, albeit often hidden from the outer eye, uplifting the spirits of those who resonate with them back to their celestial home and out of exile.

Naturally, in the context of humankind being the image of God, this kind of art is a reference to the uplifted spirits of primordial man, who acts as a mirror and reflects the light that is not deriving from himself, but from above[^2]. Primordial-man would walk as if he were dancing, would talk as if it were poetry, and his actions would be considered a work of art. It rests on the concept that, since the image of God is reflected in primordial man, the mimicking of his acts are mimics of the Ultimate Artist, the Creator, and his ways of communication and expression would be on a par with those before the Fall; all the creative power that resonates in Creation must, therefore, be derived from the singular original source, the Ancient of Days. The original artistic practice is “original” not because it is “new” and one of a kind, but because it is connected with this very Origin, hence communal and universal.

René Guénon, (2007)[^3], comments that the means of expression of this archetypal primordial man is the so-called “Language of the Birds”, which appears in a range of mythological and sacred texts in various traditions. The relationship traced between birds and their language is the association with angels and their messages, the Revelations, which are sourced from the One Truth. Primordial man bears the capacity of accessing this higher knowledge in virtue of his elevated spirit, and the channelling of this angelic means of communication is expressed in true forms of poetry and beauty.

Keith Critchlow (2019)[^4] exalts Geometry as a means of Karma Yoga, the path of enlightenment through action and practice. Undoubtedly, Geometry is a well-pronounced feature in the Sacred Arts and, accompanied by the intellectual charge of Tradition, it underlies the creative visual manifestation and serves as a lighthouse, a direction to where one should navigate. In Iconography, every single step of the icon’s making is sustained by liturgical meaning. Therefore, not just the final piece invites the viewer to meditate on the eternal archetypes presented in its finished image; but during its configuration, the iconographer also faces the symbolic ritual of these ideas in the form of action and practice. My second year project is an altarpiece inspired by the tradition of iconography. 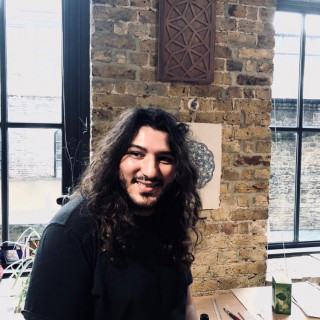 Born in Brazil, 1994. As Catholic Christians, my parents took me to masses in my childhood. The tiresome preaching would instigate my anxiety and I would frequently bother them enquiring when that would finally end, completely distracting them from the rest of the ritual. Next Sunday, my mother gave me some sheets of paper and a pencil. From then on I would spend my time copying the imagery of the cathedral’s walls.

I studied Graphic Design in São Paulo, 2016; however I reassured myself of my path as a painter and, in 2017, came to the UK to study my first at UAL. In 2019, I enrolled in another masters, this time at the PSTA, where I'm about to graduate.