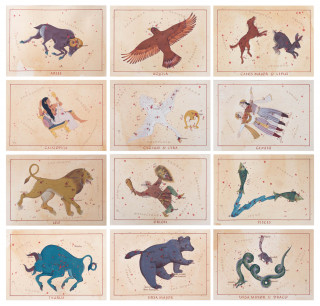 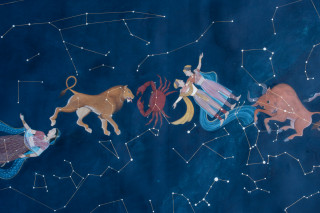 A Map of the Constellations 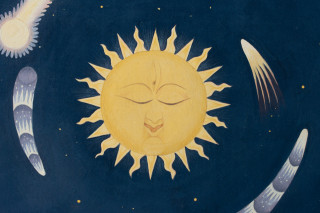 The Dream of Becoming

A Home for the Wanderers 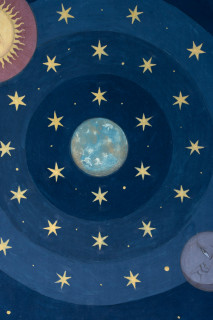 Creation of the Luminaries 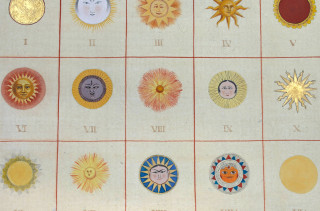 Visions of the Sun 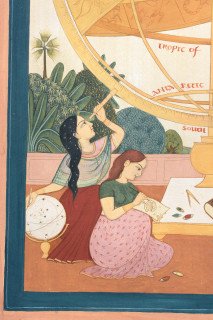 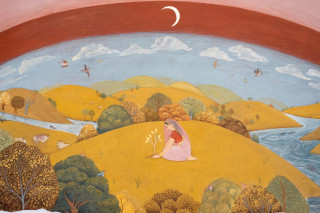 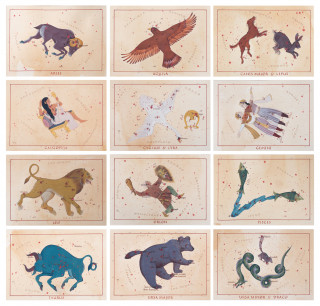 My second year project is an ode to the wonder of the night sky, and a playful reunion of the scientific study of astronomy with the symbolic art of astrology. I wanted to express the awe and enthusiasm I feel when I contemplate the majesty of our universe, while honouring the contributions of those who have contemplated it before me. My intention is to look beyond the myriad beautiful expressions of traditional culture throughout the world, through to the cosmic human tradition that links them all.

Coming to the School of Traditional Arts, I felt I had to keep asking myself, what is my tradition? Like many of us in the West, my nationality doesn’t match my hybrid ethnic background and with no distinctive cultural roots, I was constantly trying to find a context for myself and my art. It wasn’t so much a question of identity as a yearning to belong to something greater than myself. But what I’ve come to learn over the past two years at the School is that tradition itself transcends culture; it is a cosmic current to which all human beings belong and have access.

Thus this body of work has emerged from a participation in that primordial tradition which began at the birth of our universe, and whose story is strewn across our night sky.

I’m overcome every time I look up at the stars and realise that I’m literally looking into the past. This is, of course, a universal experience. Ancient humans intuited that the secret to our origins lay in the knowledge of the stars; mapping out their movements, assigning to them myths and stories, and interpreting their meaning. Modern advances in science have proven that the elements which make up our physical bodies were created in stellar explosions. This insight fills me with such wonder, I felt that there was no better place to direct my artistic energies. Every culture throughout history has participated in this cosmic tradition, and expressed it through their arts. I find I cannot separate my work as an artist from the desire to re-awaken what I feel is a lost sense of wonder at the marvels of Creation and the beauty of this mystery we call life.

For my project, I have produced paintings that are imaginative interpretations of celestial events, as well as paintings which are essentially star charts based on current data from the International Astronomical Union mixed with mythical representations of the constellations and heavenly bodies. Some of the pieces which I had the most joy in creating are actually interactive astronomical devices, the use of which encourage a deeper connection with the wonders of the cosmos. I have drawn influence from various sources in the East and West, from medieval manuscripts to 19th century astronomical prints. But the forms, materials and techniques I’ve drawn on most heavily are from the Indian miniature painting tradition, which, among the many crafts I had the privilege of being exposed to at the School, was one that deeply stirred me. I found that despite the immense focus and patience required for miniature painting, when I look at traditional examples it’s not the technical perfection that immediately grabs my attention, rather it’s a light-heartedness; a playfulness of expression that doesn’t take itself too seriously. This was exactly how I wanted my work to feel—also the process is just so much fun!

I have tried to use mostly earth pigments which I have foraged and prepared over the past two years. One of the resounding lessons of the traditional arts is the involvement with every level of the craft process, beginning with materials. This felt especially potent for my project; the elements created in supernovas merged and mingled to form our planet, which continued to create ever more complex elements that became our rocks and plants and our bodies. Collecting earths and ochres and producing colours from them, which I would then use to produce beautiful artwork, meant not just being engaged with my craft process, but being personally engaged with the story of the universe. As for blue, I used exclusively indigo, an ancient blue as deeply symbolic as it is beautiful. Indigo is a deep blue reminiscent of the inky night sky, whose pigment is hidden within the green leaves of the indigofera plant. It is a living symbol of heaven and earth.

Creating this body of work has been a wholehearted learning process for me, and is just the beginning of what I know will be a lifelong journey. I am so grateful for the opportunity I’ve been given to connect with and learn from the amazing artists and craftspeople at the School of Traditional Arts; my tutors, my classmates, and the entire PFTSA community, and for the opportunity to find my place in the cosmic stream of tradition.

I am a Trinidadian artist exploring cosmological and astronomical imagery using materials provided by the Earth. My current work is influenced by the playful forms and meticulous techniques of Indian miniature painting, though my aim is to transcend cultural boundaries and express the wonders of the universe which is home to us all. It was my interest in multicultural and interfaith art that led me to The School of Traditional Arts, where my work has been transformed by a deeper understanding of perennial philosophy and the craft process. My artistic journey had formerly been selfguided, driven by an unyielding need to create beautiful things. I have had several solo exhibitions throughout Trinidad and have participated in group exhibitions internationally.