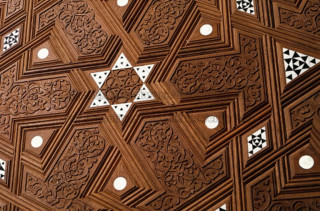 The Minbar of Saladin

This book, edited by Lynette Singer, is an example of collaboration between many people associated with the School. It begins with the journey of Minwer Al-Meheid (PhD 2004), who was given the task of recovering the design of the 12th century Minbar of Salah ad Din, tragically destroyed in 1969. Minwer came to The School from Jordan to learn the principles of geometry, in order to rediscover the ancient knowledge that was required to rebuild the minbar.

The book documents the realisation of this project and its consequences. It includes a section by Paul Marchant on geometry, its essential structure in nature, and the way the various constructions were used to recreate the minbar. It also relates the story of the process of the renewal of traditional crafts that were needed in order to recreate the minbar. Through the work of craftsmen, from around the world, the minbar has been rebuilt and the project has resulted in a flowering of the traditional arts in Jordan.