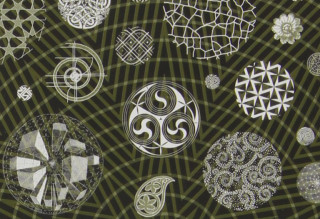 JOHN MARTINEAU graduated in Philosophy from Bristol University and spent a few years in the early computer games industry before completing a Master’s degree at the Prince’s School of Traditional Arts.

John’s project at the School was focused on geometry and harmony in the solar system, and culminated in his Book of Coincidence, which he published under a new imprint, Wooden Books (for which fellow student Mark Mills designed the logo). After leaving the School he developed Wooden Books further. He brought together many of the school’s alumni and friends – Mark Mills (MA 1996), Daud Sutton (MA 1998), Richard Henry (MA 2001), Adam Tetlow (MA 2003), Lisa DeLong (PhD 2007), Jonathon Horning, John Michell and Professor Scott Olson – to help build a series of richly-illustrated and fascinating books exploring the age-old themes of nature, pattern, cosmos, design and geometry that he studied at the Prince’s School.