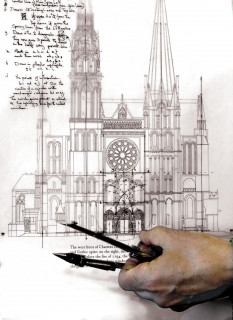 At the Prince’s School, we recognise geometry as the link between all the sacred and traditional arts, which is why we emphasise its importance throughout our curriculum and teaching.

We teach geometry as a creative practice that brings together the wisdom of the head with the practical skill of the hands and the compassion of the heart. At the same time, it is a rigorous discipline that can lead to self-development and, through systematic study, to achievement of originality which underlies all the traditional arts.

In all our courses, at whatever level, geometry is experienced as an inclusive activity, a universal language transcending nationality or creed. Human beings have always explored and practised its orderly discipline and laws governing the properties of point, line, plane, and solid. Each civilization has used it in some way. To paraphrase Plato, geometry ‘…is true for all peoples at all times…’. It was one of the Seven Liberal Arts studied at Plato’s Academy and, until relatively recently, was considered to be vitally important in the education of those who sought knowledge. The classical Greek mathematicians, Pythagoras and Euclid in particular, are well known for their contributions, but the principles they codified had beenexemplified long before their time – as the pyramids of Egypt, Lo-Shu diagrams in China and plans for ancient fire altars in India readily show.

Geometry is also a reflection of the Creative Principle; the true aspect of the manifest world at the very heart of nature. At the heart of geometry lies the circle; symbol of unity and the infinite ‘whole’, and mother of all shapes and forms. If the Creative Principle can be symbolised by a point, then the innumerable points on the circumference relate to the centre as innumerable radii, and in these innumerable relations is Pure Being. The cosmos can be visualised as the circle, each part of it lying on the circumference, which is a reflection of the centre, with each part connected directly to the centre by a radius which symbolises its relationship to the Creative Principle. Nature’s beauty consists of the harmonious interaction between straight and curve, crystalline and biomorphic. In both nature and geometry there is infinite variety in essential unity. Nature’s many examples of absolute beauty have inspired architects, artists, craftsmen and women through the ages; in every culture, traditional artisans have used basic Euclidean principles and transformed them into complex, sophisticated patterns and architectural forms, expressing their love of beauty and creation.

…This order is, moreover, related to an incredible harmony, which in the technically musical sense, pervades the realms of nature, from the stars to subatomic particles. The proportion of the parts of animals and plants, of crystal structures or of planetary movements, when studied geometrically from the point of view of traditional or Pythagorean mathematics, reveals the presence of a harmony pervading all orders of the universe. It is as if the whole cosmos were music congealed into the very substance of things...

Geometry is taught at the Prince’s School by tutors who have mastered the knowledge, skill and understanding of geometry as a sacred art and science. Their teaching combines practical demonstrations, visual displays and lectures. Drawing techniques are taught from first principles in the traditional manner: using a hand-held pair of compasses, a straight edge and a set square, experienced practitioners and mentors pass on their skills to student apprentices, practising together. In this process, students become aware of geometric pattern as cosmological, reflecting the natural order and thus inherently beautiful.