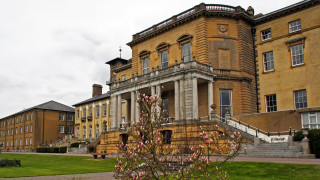 Renaissance of Bentley Priory, Battle of Britain Base

The intricately renovated stately home is an important reminder of the RAF’s crucial role in defending Britain during World War II.

Bentley Priory is an exquisite Grade II-listed mansion in Stanmore, Middlesex, that dates back to 1766. It is widely believed that the Priory was once an actual priory, and was home to a cell of Augustinian Friars. During the dissolution of the monasteries in the 1500s, it ceased to become a priory and the land changed hands many times.

In 1788, it was acquired by John James Hamilton, the 9th Earl of Abercorn, who became the 1st Marquess of Abercorn. Abercorn commissioned British architect Sir John Soane, lauded for his opulent, neo-classical style, to extend and refurbish the Priory in a plush and exuberant manner. Soanes’s elaborate presence is especially felt in the vivid stained glass windows and outstanding rotunda, which allows light to stream through the house.

Fast-forward several hundred years, and the Priory and its surrounding 40 acres were purchased by the Royal Air Force. It became the base from which the Battle of Britain was planned under the leadership of Air Chief Marshal Lord Dowding, and therefore remains a site of international importance.

The Prince’s Foundation was approached about the historic mansion in 2007, after the RAF gave up the site as part of a widespread consolidation of its London estate. It was agreed that the Foundation would help to establish a sustainable future for the Priory, with a particular focus on the heritage elements of the development scheme.

In order to do this, the Foundation facilitated an agreement between the initial developer, St Modwen, which was developing a luxury housing complex on the site, and the Bentley Priory Battle of Britain Trust (BBT), which aimed to build a museum within the Priory. Allowing both components to co-exist was no mean feat, but the Foundation helped to devise a viable business plan for the BBT, while also assisting to secure £11 million in funding from the developer.

The Bentley Priory Museum was formally opened by HRH The Prince of Wales and The Duchess of Cornwall in September 2013. Today, the Priory remains a vital asset to the country, offering visitors a cohesive insight into its rich and thrilling history.

Visit bentleypriorymuseum.org.uk to find out more