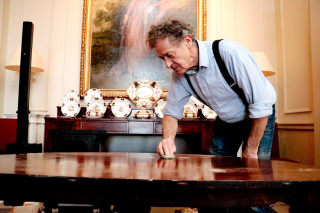 James Hardie has helped restore Dumfries House and its collection almost since The Prince’s Foundation assumed ownership and management of the house and estate after it was saved by HRH The Prince of Wales and a consortium.

James, who this year [2021] will turn 63, marking 41 years as a conserver of some of the nation’s most prized pieces of antique furniture, was first invited to Dumfries House in 2009 having impressed in his work at The Palace of Holyroodhouse in his hometown of Edinburgh.

“The collection and house looked incredibly different back then,” he recalls. “The house was freezing, just an old, untouched country house. There were pieces everywhere and some stunning items in the principal rooms — Alexander Peter beds and Chippendale pieces — that you’d only read about previously, which was unreal. The house was incredible, like walking into a time capsule. It had been lived in, but not touched. It had been decades since anything had been done to it.”

James’s first assignment was a clean-up of The Toby Jug Room, which is today the starting point for public tours of the house. The room had been badly damaged by soot and smoke damage from the coal fire and required specialist knowledge and careful attention to be nursed back to the way it was.

“It must have been someone’s favourite sitting room and they must have had the fire on for a few hundred years!” mused James. “We had to clean the smoke damage out of the oak wall panels, which was quite physical work. Each panel reacted differently and required oxalic acid on some bits and meths to clean other parts. However, we cleaned it all down and it ended up looking much as it would have originally.”

“The house has just blossomed into its world-famous collection. It really was the most uncomfortable building, like a fancy warehouse that had been unused and unloved. It’s now used and enjoyed and has such great care and attention.” – James Hardie, Conservation Specialist.

Since that daunting opening task, James has gained great satisfaction from ensuring the longevity of many of the house’s best-known pieces. These include the eight wall mirrors on the house’s principal floors. He said: “The original gilding on them will always look distressed as they’ve been subject to so much damp air, but a mirror has to look balanced and the carvings have to be all there. Originally, on one of the mirrors, the thistle emblem of Dumfries House had half a leaf missing, and we got the leaf back to what it should have looked like, which was gratifying.”

James admits feeling pressure in conserving the Blue Drawing Room’s Chippendale padauk bookcase, one of Dumfries House’s best-known pieces that was expected to fetch more than £20million when listed in the Christie’s auction catalogue of 2007.

“It took me a couple of days to settle down with the bookcase,” he recalls. “You start by doing the simple things by taking doors off, removing screws very carefully and making sure they will go back into the right places. You then start to feel more settled and in tune with the piece before moving on to tackle loose mouldings and loose bits of veneer and removing the old glue before replacing it with new glue of the same, traditional kind.

“A considered and correct view was taken to leave some cracked glass in because it’s better to have the original, damaged glass as put in by Chippendale than to replace it with glass from the same period. It’s all about the honesty and originality of the item.

“The bookcase would have been really vibrant when it was first made, the colours of the padauk wood would have been reds and purples, and the gilded handles quite striking to our eye. But, over time, it has faded with age and become more subtle and subdued. These subdued tones along with an original finish is the patination that dealers and collectors talk about and is very difficult to fake.

“There are such intricate carvings on the bookcase and it was satisfying to get them back and rebuild them.”

“There have been so many pieces that have provided such satisfaction to me through my work on them. In the rest of the collection, there is a lot of really nice pieces. My favourite is probably a candlestand in The Great Steward’s Dining Room by Chippendale, which rises and lowers and is just beautiful.”

To the uninitiated, the distinction between conservation and restoration may not weigh as heavy as it does for James.

“If you have an original finish going back 250-300 years and that’s taken off, it’s not original anymore. The finish fades and colours fade. You want to conserve and keep everything as original as possible, even down to using the old-fashioned animal glues, which I do. You’re just cleaning and waxing, and not reversing the workmanship that has created these pieces.

“Some pieces age well and others don’t. If you use a good quality polish, not too damp or wet, then the furniture will last hundreds of years.

“You’ve got to love the furniture and respect its age and the workshops it has come from. Even if it’s just a country-made chair, you still have to respect it and get it to where it’s going to be serviceable for the next hundred years. Don’t remove the beauty of old age.”

Most recently, James carried out waxing of the component sections of the grand dining table in The Great Steward’s Dining Room. As he has moved through the house over the years — making the acquaintance of, then revisiting, many of its historic contents — he is struck by the significance of the house having retained such an important collection.

“If Prince Charles hadn’t stepped in and it hadn’t been sold, the house and its collection would have gone downhill really quickly,” says James. “It’s nice to see it saved, not just for the nation but for the world and for people to see it and learn from it. It’s quite an architectural experience to walk into it — a living, breathing house and collection. It’s pretty unique.”

To find out more about Dumfries House and its collections, please visit our ‘Explore the House’ pages here.