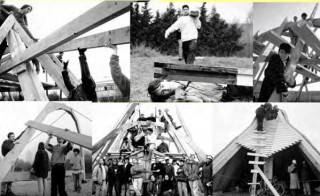 Excerpts from ‘An Editor at The Prince’s Foundation’ by Genevieve Muinzer, originally published in The Pell-Mell Gazette, The Athenaeum Club (No. 8 10th June 2021).

With so many houses in the UK predating 1901, and so many of the communities having historic roots, many British people had become increasingly alarmed at the direction that the building world was taking – the erection of hideously ugly, brutalist tower blocks, major roads dividing the walkable town centres, and urban blight promoted by using unsustainable materials. The ancient buildings and monuments in communities throughout the UK needed expert people who were skilled enough to repair them. People clearly longed to see beauty in their localities, which had been designed sustainably and built to increase a sense of society and safety.

HRH The Prince of Wales joined with many in the design and construction world who felt passionately that the traditional skills shouldn’t be lost. Buildings were being poorly repaired by untrained builders who didn’t know about skills such as specialist bricklaying, stonemasonry, carpentry and the many other traditional skills used to maintain older buildings. Other talents that were beginning to be lost were woodworking, stained-glass making and repair, thatching, mosaic- making, and drawing. Institutions were relying too much on computers when designing, so teaching drawing from life and life models was particularly emphasised.

As a major build project, the Rose Town project in Jamaica was of great importance to all of us and The Prince’s Foundation’s architects worked hard at designing housing for this impoverished community near Kingston. Jamaican housing pattern styles were studied to bring a local authenticity to the buildings, which were constructed from materials that could deal with a climate that ranged from great heat to hurricane. Fundraising enabled us to try and bring employment opportunities to the area and we contributed books for the newly built library and school.

The Foundation’s Urban Planners were called in too, to design extensions to British towns and redesign towns that ‘weren’t working’. By engaging with the community and hearing their views and needs, communities felt involved in the projects they designed.

The Building Craft scholars were always interesting to interview: they were on 10-month training programmes with Master Craftsmen in stonemasonry, carpentry or glass work, often working in one of the Royal Palaces. At the end of their training, they were almost always offered employment with building firms that specialised in older and listed buildings or new builds in a sustainable model. Their graduation ceremony was attended by The Prince of Wales, and his presence enhanced the feeling of achievement and importance in their skills. When you watched them work on older buildings, repairing them and giving them new life and beauty, you realised how valuable their talents really were.

Meeting students in the School of Traditional Arts was like walking into a zen, stress-free time zone. There was always a serene atmosphere when you spoke to the students who came from all over the world, and it was as if they were imbibing the spiritual values of nature and art. There was always harmony about the work and the people there. They studied sacred geometry from the Middle East and the influence it generated on European and early Christian art and architecture. The studios were filled with students’ beautiful Islamic patterns in watercolours, tiles, or stained glass. You were always surrounded by brightly-coloured geometric patterns that lifted everyone’s spirits. One student, John Martineau, became fascinated by the courses examining the pivotal relationship between nature, mathematics, and art. He explained that our ancestors knew more about the connections between astronomy and geometry and how they applied to art and architecture than we do today. His drawings and the accompanying texts explaining the history of sacred geometry became his passion and one that he turned into a successful business. He went on to found the internationally award-winning Wooden Books, an extensive publishing company dedicated to discussing the relationship between art and mathematics in art and architecture, printing the books on sustainable paper and using environmentally-friendly inks.

In the corner of one of the studios, head bent over seemingly hundreds of pieces of coloured glass, you would see Helen Whittaker. Leaning over the figure of a stained-glass Christian saint surrounded by intricate patterns and motifs, Helen would recount its history, showing how the ancient design connects to Western and Middle Eastern art. 20 years on, she is one of the country’s pre-eminent stained-glass window designers and conservators. She recently made the stained-glass window designed by David Hockney for Westminster Abbey in honour of Her Majesty The Queen.

Putting together each magazine edition I always sensed great depth and a creative richness to the practitioners’ lives and to their work. As someone who hadn’t trained in design, I developed a deep admiration for the architects and craftsmen I had the delight in working with and have appreciated the world of the built environment even more because of them."