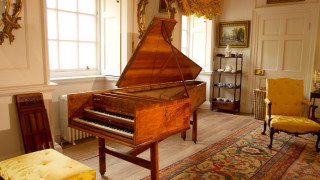 Last year, our Jacob Kirkman Harpsichord left the Family Parlour and travelled to Buckinghamshire to be restored by Huw Saunders.

The walnut harpsichord was made in London in 1772 by the Alsace-born harpsichord maker, Jacob Kirkman, and was delivered to Dumfries House later that year. It remained there until it was listed for auction by Christie’s in 2007, before the house and estate were saved for the nation by HRH The Prince of Wales.

Following the restoration made possible thanks to the support of Keneko Cord Co., Ltd., the Harpsichord can now once again be played. It has featured in a recording of John Worgan compositions recorded at Holy Trinity Church, Hoxton. The restoration has also been documented in an upcoming film.

The Prince’s Foundation was delighted to showcase the Harpsichord during two virtual events late last year; a talk by Dumfries House Collections Manager, Satinder Kaur; and in the annual Christmas Carol Concert, where it was played by Kenneth Dunsmuir.

Watch Kenneth Dunsmuir, Ambassador to The Prince’s Foundation, play a score by J.S Bach on the Harpsichord in the video below.