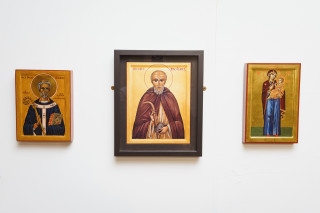 Christabel Helena Anderson, a PhD candidate and tutor at The Prince’s Foundation, School of Traditional Arts, reached a major milestone in her lifelong dedication to research and artistic development earlier this month by being awarded a doctorate in recognition of her expertise and talent as an iconographer and researcher.

Christabel presented her research to independent examiners at her viva voce, talking them through an exhibition of her work while highlighting the research and skills behind her creations. Her project, entitled ‘Design within Holy Tradition: Towards a Theological Approach in Iconographic Practice, from St Moluag of Lismore to St Sophrony the Athonite’, explores potentialities and parameters for designing new icons for saints who have no previous iconographic models.

Specialising in Orthodox Christian iconography, she meticulously hand makes panel icons in egg tempera and gold leaf, miniature painted icons using techniques of manuscript illumination in hand made watercolour, gold and gemstones on vellum, and enamelled metalwork created within the iconographic and spiritual tradition of the Orthodox Church. The designs, methods and materials are inspired by sacred iconographic exemplars from throughout the Orthodox world and the arts of Britain and Ireland from the late antique and early medieval periods.

“I began my research into regional vernacular in sacred art and architecture in the early 1990s, and since 2002 focused on Orthodox Christian iconography, theology, and the art history of Britain and Ireland. Already a professional painter in the genres of portraiture and still life, I decided to refocus instead on the study of traditional artistic techniques, and the practice of sacred iconography. By God’s grace this became possible in 2008 when I embarked upon a Master’s degree here at The Prince’s Foundation School of Traditional Arts. It was clear at the end of the MA that this was only the beginning of a research enquiry that explored many profound and subtle questions.”

“From a young age, I felt that God wanted me to do something with my painting. However, I had not encountered the contemporary practice of sacred art whilst growing up in South Devon or in my travels, thus, it was necessary to search for the right path.” Via a BA at the School of Oriental and African Studies (SOAS), that path eventually led Christabel to iconography.

“The practice of this type of work must be God’s will as it is a particularly sacred art. I finished my Master’s degree, which focused on iconographic practice and the early art and iconography of Britain and Ireland, in 2010 and later started doctoral research enquiring into methodologies towards designing a traditional icon within the sacred iconographic tradition in cases where there are no existing iconographic exemplars or previous representations. This is important because the icon does not present an arbitrary appearance, but is a true representation and a spiritual portrait of a specific saint.

“In this country we have a multitude of early saints and although accounts of their accomplishments and virtues are plentiful, physical descriptions and early artistic representations are rare. There are also cases of newly canonised saints who have no icon and other cases where design may be required. My research focus was to find a systematic method towards design within sacred Orthodox iconography, intertwined with the theological tradition, seeking a solution that would have integrity and depth.”

“In seeking a model for an approach, I studied the work of an exceptional iconographer of the last century, Elder Sophrony (Sakharov, d. 1993) who founded the Monastery of St John the Baptist in Essex in 1959. At the end of the research project he was canonised as Saint Sophrony the Athonite, sharing a title with his Elder, Saint Silouan the Athonite (d. 1938). The majority of the project work was based on his work, carefully studying every detail of his approach as a form of apprenticeship.”

Christabel’s exhibition also included privately commissioned works that were generously loaned back to her by their owners, including a miniature icon of the Virgin of the Sign in techniques of manuscript illumination featuring handmade rubies, sapphires and pearls embedded into the frame, and a gilded representation of the 6th century Scottish missionary St Moluag of Lismore. The clothing and other details are not just by chance, but instead the result of painstaking research that took Christabel months of patience to uncover.

“In observing the early sacred arts of this country and throughout the Christian world, there are many differences in artistic, architectural and calligraphic forms from region to region. This regional variation is reflected in my work. For example, the icon of St Moluag is made from ochre pigments mined in this country. His episcopal staff actually still exists and I obtained photographs of it so it could be represented in the icon. Research indicated that he was an ascetic, which informed his appearance and contributed a large part to his facial expression.”

This is only one example of Christabel’s dedication to her work, and it is in part this meticulousness that has earned her a doctorate, thanks in part to generous support from the A. G. Leventis Foundation. She is also a Queen Elizabeth Scholar, an INTBAU Young Practitioner, and graduate of The Prince’s Foundation, School of Traditional Arts — and now a fully-fledged PhD. Congratulations, Christabel.